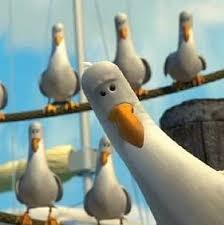 HomeWrecker apparently believed that sleeping with my husband gave her the right to call my children ‘hers’. Aside from this causing me to see shades of red that aren’t even on the color spectrum, I simply had to sit down to try to understand more about the audacity that it takes to do this. After examining some things, I decided to give her super adorbs and horrifically misguided notion a name. I call it ‘Parentage by Hostile Takeover’.

What exactly IS a hostile takeover, you ask?

Let’s say that my little family of four was a company. HomeWrecker wanted it, so she decided it should be broken up, split into pieces, and sold off for spare parts. Well, according to me – one of the owners – IT’S NOT FOR SALE. This is my life’s work. 14 years of blood, sweat, and tears have been invested.

This matters not in a hostile takeover.

Hostile takeovers always begin and end by circumventing the normative rules of fair play and empathy. What you want is irrelevant, Wife. It’s just business.

And as the CEO, my husband had the ultimate golden parachute; an iron-clad contract promising that in the event of a takeover, he’d have emotional support, retain his good name, be given a home to move right in to while frequently enjoying sexual escapades and what is likely an infinite variety of frito-based casseroles delivered piping-hot to his gaping maw.

His indifference about the other owner and two tiny employees, fueled by his raging and well-hidden narcissism, meant that the takeover would be only mildly unpleasant for him. A speed-bump, at best. His bags were already packed, and within 20 hours of my discovery of the affair, he’d simply jumped out of the plane and pulled the chord, leaving me and the kids in total free-fall with nothing but anvils cleverly disguised in our parachute packs.

She didn’t want or need to know the details of Honey’s exit strategy. All that mattered was that reading ‘Divide, Conquer, Destroy: A How-To Guide!’ had paid off for her in spades.

But she wasn’t finished. She wanted to go after the employees. Newly formed companies are fragile things, and you need to present an image of success and unity immediately. But united fronts don’t work very well if you can’t get the help to jump ship for the new management. So, unable to obtain approval from children who can’t speak for themselves (and who live on the other side of the country), she decided to simply hijack their consent and claim that they’re happily working for her now.

At the time this was created, Honey and HomeWrecker were unmarried and had been together for a little over a year. But that’s their family, y’all! Creating a collage titled ‘Our Family’ featuring my kids and putting it on social media is just another way of saying ‘This is happening whether you like it or not, so get used to it.’

Excuse me, won’t you? I need to take a golf club and smash up a massive display of glass frames in Hobby Lobby before I can proceed. Be back in a jiff.

Alright. Let’s take a good look at that family. Little Man and Baby Girl have never met the two other kids, or the baby that has subsequently been born. They’ve met the HomeWrecker that encouraged their dad to move away from them once. And Honey? He’s now $18K (and climbing) behind in child support, and has seen his kids for a grand total of 4 days since he walked out on them over 2 years ago.

HW’s mom comments ‘Very nice family there.’ Oh, yes. Totally. Don’t they always say ‘The family that has nothing to do with each other stays together!”…or wait…how’s that go again?

What a crock of rage-inducing nonsense. This person is out of her ever-lovin’ mind. Yet, there’s always someone making a comment about how lovely their ‘family’ is. Normalizing. Re-framing. Sweeping the hideous truth under the rug and playing along with Honey and HomeWrecker’s delusional script.

HomeWrecker comments ‘One lucky gal !!!!’. Yep, she’s one lucky gal, by golly! But I wouldn’t really describe it as ‘luck’, HomeWrecker. I much prefer the term ‘premeditation’.

Ah, I guess we have our answer. That she was not even married to Honey when she joined the second group down is irrelevant. She’s in charge. Get over it. Did she mention she’s in charge?

Ah, and here we are with the pronouncement of family again. If a family is relegated to nothing more than some names on a Christmas ornament, is it real? Have you ever wiped away Little Man’s tears over the loss of his daddy? Have you ever stayed up all night with Baby Girl when she’s been sick? Have you ever, even once, acted in the capacity of a parent to either? No. In fact, is it not true that you have profoundly HARMED them by your actions and choices? Then how is it that you could ever have the balls to co-opt the sacred title of ‘parent’ and attempt to apply it to yourself? 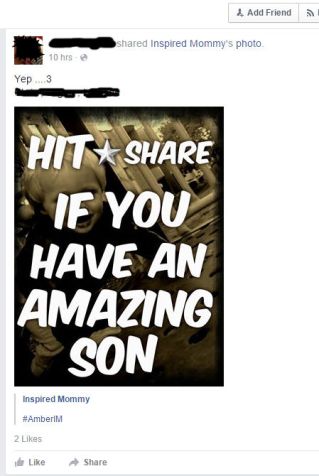 And then, we have the cherry on top. For those of us who didn’t fawn over the first several memos about the awesome new boss lady in town, fret not. She’s going to make it very, very clear to all of us pee-on’s who just aren’t getting the message.

The comment about my children being ‘her family’ was one thing, but there’s something so profoundly personal and intrusive about this one. It made me recoil on a guttural, maternal level that apparently lays dormant within my chromosomes until moments like this.

She called my child her son. HER SON.

How is it that a person can simply announce parental rights to which they are not entitled? Not only that, who exactly is the intended audience for these numerous pronouncements on Facebook? The answer to that is two-fold. Entitlement, and image-control. She does not care about my children. I know this because of her actions. She does not care about causing harm to me, she delights in it. She does not want to make any of these posts private, because I AM her target audience.

Hmm. I think this could be directed at me, but for all I know she was step-mommy to some other kids that are no longer on the scene because she ‘found her bliss’ with some affair partner and wrecked those homes, too.

If it is for me, I guess that would mean I’m being told that she is ‘accepting’ my kids and that I’m treating her like crap for loving them. Well, I guess that’s sorta true, HomeWrecker. I don’t want you loving my kids, because your idea of loving them has included some pretty selfish demonstrations of the word thus far.

She is also very clear that she would ‘die for’ and ‘do anything for’ her kids in other posts. And as she’s made painfully clear, she believes my kids are her kids.

Ergo, she’d ‘do anything’ for Little Man and Baby Girl…except for refraining from incessantly interfering in their father’s marriage, encouraging him to move 2,300 miles away from them, faking a pregnancy to get him to do just that, and then ‘accidentally’ getting pregnant for real in order to anchor him there which, consequentially, equals taking him out of their lives as a co-parent for good. You know. ‘Cept for that.

But she’ll totally set up the futon in the living room and make you a really nice fritter pie if you ever come to visit! Sickening.

Without my disdain, would she feel relevant anymore? Would this game she’s playing with me have to end? Where would the fun be in that?

Then again, it IS possible that we’re not dealing with the level of sophistication that I’m attributing to her here. Perhaps, it’s much simpler than any of that.

(Sigh) No, HomeWrecker. That’s a pyramid. PEER – UH – MID. It doesn’t belong to you. In fact, there’s a funny story about a British explorer who once tried to claim- 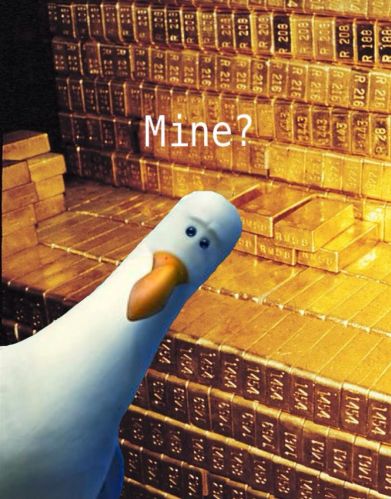 (exasperated) NO, HomeWrecker. NOT yours. That’s gold from inside the repository at Fort Knox. Come to think of it, how’d you get in th-

Please stop interrupting me. And no, you can’t have that either. It’s the last one.

That’s the friggin’ sun, for God’s sake. What is the matter with you? You can’t just –

Nope. Not enough nope in the world.