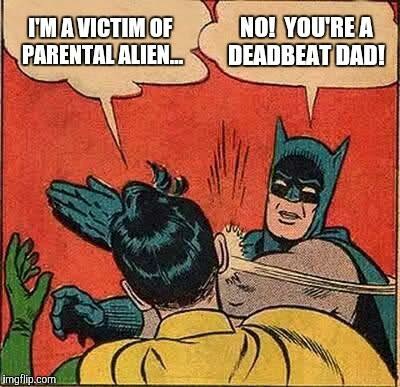 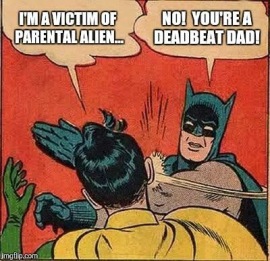 As I’m digging a post hole for the kid’s play structure in the 100+ degree heat a couple weeks ago – with my family visiting and my children watching – a sheriff walked up my front path and served me with papers indicating that you’re taking me to court for joint custody of the kids.

The documents reveal that you ‘can’t visit them because of my refusal to co-parent’. And, you want me to pay for your $3,000 in attorney’s fees.

I’d like to lay out my case in advance, if that’s alright with you. My lawyer will argue similarly next week, but this will help me clarify some things you don’t seem to be understanding. I’ll address each of your concerns, because God knows you’re the wounded party here.

Since you moved thousands of miles away, I have conducted Skype calls, at my insistence, between you and your children – on a schedule – every week for the last 136 weeks.

I have responded to any questions by text or email about the kids, though I can count the number of times you’ve asked anything about them on one hand. Occasionally, there has been anger and snark in my responses. That tends to happen when you withhold food and rent money from our children to the tune of almost $30K. Makes me a little testy.

But I always respond.

There’s no screaming. No cursing. No threatening. It’s always just me and my sarcasm drone dropping truth bombs on your cowardice. You told the family court mediator a few weeks ago that you are ‘scared’ to ask me about the kids because I am always ‘mean’ to you, so that’s why you don’t.

What formidable power I wield! Behold, the power to make you into a crappy parent with my magical wand of derision! You will NEVER find all my horcruxes, Potter…flee in terror from my wrath!

Or, pull on your big boy pants, ask about your kids, and just accept that horrific treatment of your family translates into me never being very nice to you again. I guess that’s one of those consequence doo-hickeys we hear so much about these days.

But, beyond being amenable to Skypes and responding to the extremely rare text from you, and making it known you can visit them WHENEVER YOU WISH, what exactly do you think ‘co-parenting’ with me entitles you to? I mean, you already handed me every single task that you would have had to do as a father for the rest of my natural life on top of my own tasks as a mother. Therefore, how could I possibly be failing at it from where you’re sitting?

What more is it that I’m not doing for you, sire? How may I serve you further, my king?

Would you like school reports and hand-drawn father’s day cards mailed to you? Oh, wait. I sent those to you last year without you ever even once asking.

Photographs? I mean, you’ve never asked me for one, and my FB pictures are public, but you could always see if I could mail you some. Oh, wait! I mailed you a pack of preschool pictures this year without you asking at all.

The problem here is not me, it’s you. I am not failing to co-parent, because I have no one to co-parent WITH. I am BOTH PARENTS. You’re not doing anything. You’re not parenting, or co-parenting, or semi-parenting, or quasi-parenting, or partial parenting, or ANY parenting. You’re the anti-parent. You don’t even pay support anymore. Now, you frequently COST me money, money that should be spent on gymnastics classes and karate lessons. Can you at least take some of the load off by driving them to their next checkup? No? Then what the &*^%%^& good to me are YOU as a co-parent?

That’s what it comes down to in the end, isn’t it? Choices. And this is the life that you chose. Now, your poor choices have come home to roost. You can’t afford to breathe, let alone support that family and this one. So you think getting partial custody will relieve that, but you never sat down to do the math. I did. It would cost you MORE to fly them out ($3K) to visit you there. So, why are you doing this, I wondered? Do you actually miss your kids?

Sadly, my lawyer contends that you may, but that is not the impetus of this case. He’s seen this tactic a hundred times. You’re following a script that he is very familiar with, one that had not occurred to me. You’re trying to manipulate family court to agree to grant you partial custody, and once you get that in writing, you can walk right over to the child support court and say ‘See? I have partial custody granted to me. Lower my child support payment’. And they will have to.

You don’t have to actually comply with the custody order. You can just claim that you planned to, but couldn’t afford it. By your own admission, you’re broke. You haven’t got a ‘dime to your name’ (except for getting mommy and daddy to loan you money for a lawyer rather than provide for your kids). So paying for cross country flights for both of them is downright impossible.

And may I point out, once you get this reduced order of child support, that you haven’t got the means to pay THAT either? So why this colossal, expensive waste of time and money for both of us who have neither time or money to waste?

Well, you said it with your own words to me not 3 weeks ago. I broke radio silence and asked ‘Why?! Why are you filing this custody case?’ and you said ‘I can’t afford to pay $X,XXX a month in child support’.

You didn’t say ‘because Baby Girl needs her daddy in her life, and I’ve woken up about how badly I’ve failed her. I’ve got to make this right.’

You didn’t say ‘because Little Man will struggle his whole life with the fact that I’ve left him, especially since I’m raising another family and not him. I can’t do that to him. I need to make this right.’

So…the answer to your woes is to file a case against me, make me spend money I DO NOT HAVE on a lawyer, place the blame on me for ‘refusing to co-parent’, and then to pour sugar in the gas tank of this flaming wreckage, you want me to pay for your slimy attorney to boot?!

Maybe we should take a look-see at some ways that you may have failed as a…whatever-parent since you extricated yourself from your children’s lives on purpose. Perhaps that will make my point a bit easier for you to understand.

1,120: That’s the number of days it’s been since you walked out and chose to be an absentee parent. You didn’t move there because you were a bone marrow match to a kid with leukemia. You didn’t move there for work – you’ve been consistently unemployed since arriving. You moved there for your affair partner, a stripper. Way to show your kids that they’re a priority. You do nothing but phone in your job as a parent, as if there even is such a thing.

2,340: That’s about how many diaper changes I’ve given Little Man in your absence, and about another 420 times I helped him on the potty until he was fully trained and didn’t need help anymore. How many times did you help him? Oh, that’s right. Zero times.

4,400: That’s about how many diapers I changed for Baby Girl (at 5/day) since you opted out. And 240-340 is around the number of times she’s needed help on the potty after training. Oh, and I potty trained both of them of course. By myself. How many potty training-related messes or tantrums did you handle for your 2 children? Zero? I see.

800: Number of baths I’ve gotten down on my knees to give to them. Whether I’m sick or injured or upset or exhausted – these things matter not when you are the only parent.

16: That’s the number of trips to get their hair cut you’ve not helped out with. 20 or so trips to apply for aid of various kinds, or to qualify them for school. 150 or more times you’ve failed to take them to counseling, or to church.

380: That’s the number of times you’ve failed to drop off or pick up your son from school. That’s 190 times he’s looked to the school door at the end of the day, and it was never once his father waiting there.

2,400: The number of times I’ve read books to them at bedtime or otherwise. That’s a low estimate. 800 family prayers you have not held hands with them for.

5,000: Number of songs I’ve sung them at bedtime and nap. Seem high? Nope. That number is probably low. I sing to them every single day, multiple times a day.

1,120: That’s about the number times you’ve never once helped one of them into their jammies. Multiply this by two for 2 kids, that’s 2,240 times minimum that I’ve helped kids in and then out of pajamas that you haven’t. THAT’S JUST THE DAMN JAMMIES. THAT’S NOT EVEN COUNTING THEIR REGULAR CLOTHES.

1,520: That’s about the number of times I’ve buckled and unbuckled both kids into their car seats JUST RELATED TO GOING TO OR COMING FROM SCHOOL. We’re closer to 4,000 loading/unloading of kids, total, since you felt you had to go in the opposite direction of your son and daughter.

3,360: That’s the number of times I’ve prepped, cooked, served, and cleaned up meals for these children. It’s probably another 3,000 snacks I’ve prepared. Oh, and I’ve had to shop for it all, with 2 kids in tow. You’ve failed to prepare a meal for them, on purpose, in 3 years…let alone sit down to one with them.

10,000+: Number of times I’ve searched for, put on/taken off/tied/untied kid shoes. Who could count so high? I won’t even try. It’s also the number of kid clothes I’ve washed, folded and put away. Just me. I have no other parent, co or otherwise, here to share the load.

I just built them a 7 foot tall wooden play structure in the yard with a climbing wall, a sandbox, and a slide. How much sweat and toil did you decide to offer up to bless these kids? Oh, that’s right. Zero. You moved away and can’t do things like that for them. Which is, of course, exactly why I felt like I had to.