And so begins a five part mini-series I’ve written featuring a front row seat to HomeWrecker’s deep love for ‘Selective Victimization’. Today, I will finally begin to give a complete voice to the tale bearing half the name of this blog. For your enjoyment: HomeWrecker’s taunts, cruelties, lies and misdeeds, part 1 of 5. Let’s do this.

Confused? You won’t be, after this episode of…Soap! (if you don’t get this reference, you weren’t watching the right TV shows in the 80’s).

After I forced the truth from Honey’s lips on February 22nd, he bolted out of town on the 23rd to go live with HomeWrecker before a single consequence could befall him…much like a criminal fleeing a crime scene. I went into a downward spiral of excruciating heartbreak, confusion, and intense rage. How could he do this, and how could some woman encourage him to simply dump his family? I had a first name, and I had phone records. And that was it.

So I went to work finding her.

By the first part of March, I ended up with a phone number that I believed was hers, but later realized it was (probably) her mother’s. I texted Honey one day and told him that I was going to speak to her, no matter what. He was immediately defensive. ‘What are you going to talk to her about?’ to which I replied ‘None of your business.’ He then claimed over and over that ‘She doesn’t want to talk to you’ and that ‘she already knows everything.’ Oh, that’s sweet Honey. But you know how I know you’re lying? Your lips are moving and sound is coming out.

He did and said everything under the sun to try change my mind (by text, of course). I didn’t listen. She had kids too. I felt like not saying something was the equivalent of letting Jack the Ripper take a seat at their dinner table. My conscience was not…at ease with that. I just wasn’t convinced she ‘knew everything.’ I wasn’t convinced, mind you, because her FB page that I’d also found in early March was positively littered with posts about hating men who lie and cheat.

Honey simply could not have me get on the phone with her. I presume he took the initiative to do some preemptive damage control at that point, and began to paint me as crazy. It’s nothing more than a way to make what I might say about him irrelevant or insignificant. And of course, it was a way to justify his unjustifiable actions. If I’m crazy, she doesn’t have to feel guilty or be responsible for the harm she’s caused. She got the ‘Honey’ version of the truth. Which is, of course, no truth at all. It only worked because she let it. I should know. I’ve been saying that same thing to myself for over a year now.

And, if you’ve ever had any dealings with serial cheaters before, you know this is right out of their playbook. It’s on page 12, right next to ‘tell your mistress that your wife was materialistic, cold, shallow and unloving.’ This just in: I was none of these things.

Men have been saying crap like this to be let into beds since the dawn of time. But does the fact that she was lied to excuse any of the horrific things she did? No. Those choices are all on her. This is why I hold her to account for her cruelty, whether she was lied to or not.

Because simply put, she’s kind of a dick. Honey or no Honey.

So around mid-March, I sat down with my phone and with trembling hands sent her a text. ME: ‘Is this Honey’s girlfriend? This is his wife.’ Response: ‘No, but this is her friend. You shouldn’t be trying to reach her and cause problems. None of this was HW’s fault, she’s a great person. You had problems in your marriage and HW was just an innocent bystander in all this.’ ME: ‘I’m not trying to cause problems, I just need to speak to her. Can you please give her my phone number and ask her to call me?’ RESPONSE: ‘HomeWrecker said she wants to hear what you have to say. You can text it here.’

Curious. I could have sworn Honey said she didn’t want to hear from me……

I sat down to draft the text, but I couldn’t get that line out of my head…’she’s a great person’. How does her ‘friend’ define ‘great’ exactly? Because great people don’t go around knowingly breaking up families and then go posting hundreds of things about how much they hate people that go around breaking up families. I remember thinking ‘HomeWrecker is either evil incarnate and the biggest hypocrite alive, or is completely in the dark.’ I had no idea which it was. I was truly baffled. It seemed that Honey was forever gaslighting me, even from beyond the marital grave.

I then sent a very long text detailing what I knew at the time (which is 1/10th as much as I know now) about how this man cheated, lied and bailed on me and his babies with zero warning and no cause, which in a normal person’s world would be a BAD thing. But after I hit send, I wondered…was that a bad thing to her? Don’t know. In her world where banjos endlessly play, maybe this was just what you did with a married man on a Tuesday night at the ‘Waffles n’ Wash.’ I mean, aside from eating waffles and doing coin laundry, of course. (note: there is no such business. But there totally should be, right?!)

And as an aside, I actually LOVE the banjo. Especially in folk music. But not in the ‘You ain’t from around here, are ya, pretty mouth?’ kind of way. Moving on.

And yet, it was not meant to be. The text was so long, the recipient’s phone couldn’t download it. So I got a text back from her ‘friend’ asking me to resend it. I chose not to.

I spent a few days thinking long and hard about why I was doing it. Was I really trying to help her, or hurt Honey? Was it neither? Was it both? I didn’t know. I was an emotionally destroyed mess in those days. So I erred on the side of caution and refrained.

Ultimately, I went a completely different route which was much more direct (and much shorter). This one said ‘It was fate that the text I sent you never got to you. Because if you’re the kind of person Honey claims you are, one that knew we existed but didn’t care, one who faked a pregnancy in order to encourage him not to seek counseling with his wife, one who could care less who was left fatherless…then you get what you get. Have fun trusting him when he goes on the road for work. You may want to check his emails and his texts from time to time. See you in 10 years. I’ll buy you a drink and tell you the whole story while you bang your head against the bar, asking ‘why didn’t I listen?’ I then gave my phone number and contact info, told her that if she wanted to spare the suspense and save herself a lot of time and heartache she could just call me, and I left it at that. Of course, she never called.

Later that day, Honey texted ‘We’re getting a divorce, Wife. What do you think this will accomplish? She doesn’t want to talk to you.’ I had a text that told me otherwise, so I just replied with ‘You’re a disgrace.’ And of course, he never responded.

What I didn’t know at the time was that later that very same day, HomeWrecker began her public campaign of selective victimization posts on FB. Rather than call me and talk as I offered to, woman to woman, she decided instead to ‘speak’ to me via this passive aggressive post, while simultaneously vilifying me to the masses:

Oh, and just for curiousity’s sake, WHAT EXACTLY IS IT THAT YOU FEEL COMPELLED TO SPEAK YOUR MIND TO ME ABOUT? What could I have possibly done that would give you cause to speak your mind, other than point out the cruelty and selfishness of what you’ve done? You just spent the last five months making decision after decision after decision to knowingly disregard me, my life, my future, my children, and my family. I, however, just learned of your existence 3 weeks ago when my husband abandoned us out of the clear blue sky, and just learned your last name 48 hours ago. So lay it on me, crazy pants. Give me your best shot. Tell me my crimes, so that I may beg your pardon. Is this reality? This can’t possibly be reality.

And, I guess this inner rage you’re suppressing as some ‘gift’ to Honey means that I should be grateful for your restraint? Is that the same restraint you used when you decided to post this private, salacious garbage on your public profile for the whole world to see? How is it that my life has suddenly become entwined with this tacky soap opera from hell?

At this point, I felt like laughing that kind of unhinged laugh that comes from not knowing what the hell else to do. Kind of like Tom Hanks staring down through the floor of his MoneyPit. 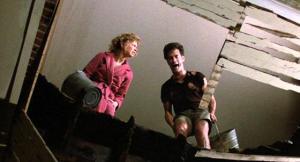 What could possibly top this? It seems I wouldn’t have to wait very long to find out.