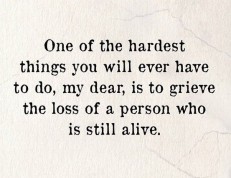 Too bad you can’t move on, Dear.

It’s not as though someone died.

That you loved someone who lied.

Yes there’s pain, but not as with death.

Who are you to languish so long

In those mother’s grief-filled corridors?

Husbands depart and return not from work,

Stolen from life without warning.

Who are you to weep bitterly as the widow

As though you could grasp her mourning?

…We, the disillusioned, take issue

With the constraints of those who believe

A set of rules exist for our pain, by comparison,

And that we lack the legitimacy to grieve.

Yet we know pain this pervasive can only be found

Lying somewhere in the chasm between

Surgery while awake and aware,

And an ever-repeating bad dream.

So don’t apologize, dear one, or feel any shame

For languishing at suffering’s table.

Let no one diminish your place or its reason…

So to those who’ve been betrayed, let us speak our own language.

Let us be helpful, and teach it to others.

We’ll know each other by our matching scars –

A firebrand of sisters and brothers.

We will never tell you ‘your suffering doesn’t measure up’,

Stealing any fraction of peace you can derive.

Seek, instead, those who know just what it feels like

To mourn someone who is still alive.