So, I recently learned that H-Dub’s mother got some new stickers for her truck. You know those stick figure family ones? Well these were just like those, but they were ‘Grandma’s Angels’. Wait, I’m sorry. ‘Grandma’s. Angels’. We must include that uninvited period. 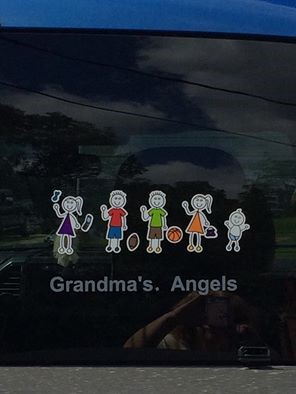 Apparently, that’s my son in the green shirt and my daughter in the orange dress. This would be sweet and endearing in some parallel universe, were she not the mother of the heartless harpy known as H-Dubs.

And, were this not the woman who wrote ‘string the bitch up!‘ on FaceBook about me so long ago. Yet, this is the same woman who has 9,684 God-loving, family-adoring, military-supporting, shelter-animal-rescuing FaceBook posts. I guess being two-faced runs in the family, like that weird longer middle toe thing.

And my children, who she’s never met? The ones that now have one parent instead of two in this state thanks to her daughter? They’re her grandchildren, y’all.

There’s no shame among any of them. Honey, HomeWrecker, and HomeWrecker’s mom all believe they have not done a thing wrong. They are in-your-face, defiant, and not a damn bit sorry.

They are SO not sorry, in fact, that they’ve decided that the mere inclusion of my children on some Christmas tree ornaments, in some tacky collages posted on FaceBook, and on some stickers on a truck somehow qualify them as being members of my children’s family.

I mean, not that my babies will ever feel that inclusion. It’s all for show. And believe me, that is perfectly fine with me. What is not fine with me is the insinuation into a position of familiarity that they did nothing to earn, and their fervent desire to normalize all of this through their continuous efforts to rewrite history.

But…just how far are they willing to go to make others believe this is all one big happy (separated-by-thousands-of-miles) family? 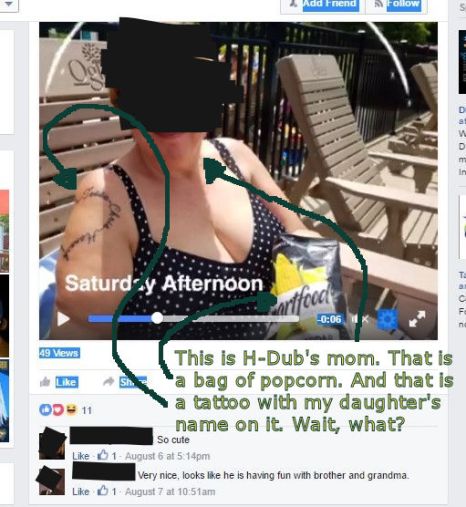 Yes, that is a tattoo. No, I don’t know if it’s real or if it’s temporary, but I’m guessing it’s real based on other recent tattoos. All I know is that if it is, my children’s names are TATTOOED ON HER ARM. FOREVER.

And that started me thinking about the gullibility that it would have taken on their parts to believe the narrative Honey waltzed into town with. For them to accept him with such open arms, it’s likely that I’ve been painted a Nazi sympathizer, a disemboweler of kittens, and a blood-thirsty viceroy attempting to stop all trade shipments to Naboo. Because really, unless I am the devil incarnate in his campfire tales, on what planet could these human beings possibly think that what he did was ok?

Now believe me when I say that I’m NOT one to sit in judgment about being gullible where Honey is concerned. I believed him to an absolute fault, largely because he was so very skilled at hiding his secret life from me. But…you can’t just lie about being fresh off the boat from leaving a wife and two babies in diapers. So how exactly did he convince them that walking out and never looking back somehow didn’t make him a family-abandoning douche-canoe? Nay…that it made him marriage material?

I don’t actually know that they needed any convincing. I think that perhaps that kind of behavior had been normalized for them already. They have shown that their standard is not exactly high. Any sane woman should have taken one look at a man who left his two babies cross-country in his rear-view mirror and kicked him squarely in his cash and prizes.

Not H-Dubs. His fatherhood was an aphrodisiac, not a deterrent. That he abandoned them to a life without that father and without financial support is really no business of hers. She just saw what she wanted to see, and dubbed it a gift sent straight from heaven.

I guess it could have been, if heaven was passing out a lazy, Call Of Duty-addicted man-child with a penchant for deleting browser history.

And her mom just hopped right aboard the S.S. Sh** Show without a second thought, too. Now she thinks the words he uttered in front of judge (for a third time) about ‘forever’ and ‘in sickness and in health’ have made it a safe bet to sear his children’s names into her flesh. That they have ignored every single red flag, ignored my attempt to give them a heads up (a mistake I made once and never tried again), and are forcibly jamming the happy family narrative down the pie holes of the rest of the world makes me think perhaps I’ve been going about this all wrong.

These are some extremely gullible human beings. I could be making a killing off these people.

Perhaps, what I should be doing is trying to sell them half-off burial plots in the lost city of Atlantis. Or impersonating a Prince from Nigeria who really needs to unload $800,000 U.S. dollars so that he can access his family fortune. I could offer them a real nice timeshare deal I heard about in Narnia. Do you think they’d give me $250 for a Neiman Marcus cookie recipe if I asked just right? And because they excrete awesomeness, I want to share my lottery winnings with them – I just need them to send me their banking pin number, and I’ll handle the rest.

Alas, these tactics would never work on any of my readers. They’re too smart for any of that. However, I hope it’s not too much to ask for you to forward this to ten people to help me get my badly-needed eye transplant (MicroSoft has promised a penny for every forward!). And of course, I think it’s only fair to tell you that if you don’t share this blog on FaceBook at least 17 times in the next 20 hours that you’ll be responsible for the death of my Pekingese, the Illuminati pilfering and disseminating my secret family meatloaf recipe, and my slow descent into madness. Just sayin’.