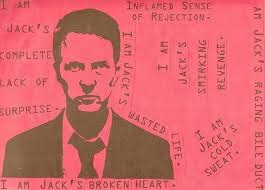 ‘What’s going on here? I don’t understand, Honey. What…I mean…are you divorcing me or something?’

My life flashed before me like the infinite frames of a film reel.

I saw the wedding. I saw us laughing. I saw us lying in the back of his truck watching a meteor shower. I saw him resting his hand on my pregnant belly. I saw us rolling around on the floor, playing with the babies.

These frenetic visions, like so much dry tinder, added to the conflagration until the plane was in total freefall. The tip of its nose was headed directly for our split level with the big tree out front, and I alone had a front row seat for this theater of mass destruction.

As we hit, I remember thinking ‘Have I been sleeping? Had I slept?’

The blast was perfect in its eradication. It left no trace of the life that had been there only moments before. A blackened crater the size of Milwaukee and a few Cheerios were all that remained.

As if the crash weren’t enough, he’d rigged the house to blow. He’d covered all his bases. As it turns out, one can make all kinds of explosives using simple household items. Orange juice and lye met with jet fuel to obliterate my nice, neat little house, launching the flaming wreckage of what used to be walls and furniture and personal effects into the stratosphere. Hell, it took out the whole block it sat on, the city and the state where it resided, and the continent upon which it drifted.

Splintered shards of what used to be the stairwell will serve to someday baffle archaeologists in a remote area of the Himalayas.

A piece of the couch cushion will forever spin, rise and fall in a lazy river making its way to the sea on a remote island near Fiji.

The screw from my door knocker’s gotta be out past the rings of Saturn by now.

And you can now count my flatware amongst the space junk clustered and hovering over South America.

And, despite some fairly mind-blowing improbability, this perfectly intact Mother’s Day card from Honey (written just months before he met HomeWrecker) tumbled and flung its way to the galaxy’s outer regions. It can currently be found floating silently somewhere out near Betelgeuse.

Maybe it will do us all a favor and get itself pulverized by a passing meteor shower.

Or perhaps when Betelgeuse goes supernova, it will reveal in its final blinding moments the infinitesimal bits of my pulverized aorta, a small piece of the kitchen sink, the flaming lies written by a stranger I once loved, and the missing button from that shirt that I’d been looking for for, like, forever.

I, for one, would be truly glad to see it go. It should no longer exist on this planet, or any other. It should burn.

Everything else was a total loss. I suppose I should have been upset about all of my nice, neat flaming little sh**, but I wasn’t. The linens can smolder for all I care. I’ll get new sheets.

I cared quite a bit that it blackened my soul, staining it with grief and anger forever.

And I cared very much that the blast caused such extensive damage to my children. It not only obliterated their father’s presence in their lives, it painfully cauterized their wounds with the permanent scars of abandonment.

The annihilation was exquisite and complete and too cruel for comprehension. And now it’s made me know things that I never wanted to know.

Like that I’ve fooled myself into thinking ‘disregarded’ and ‘humiliated’ are words that would never apply to me.

I am Jack’s inflamed sense of rejection.

That I now worry men are simply unknowable, uncaring liars who can turn on you in the blink of an eye.

I am Jack’s raging bile duct.

That Honey’s unqualified betrayal sought out and destroyed every good and lovely and trusting thing I had inside. And that I’m…ruined.

I am Jack’s broken heart.

I didn’t know this man. Was he ever real? Had I just given 14 years to a figment of my imagination? Am I Jack’s wasted life?

Had I conjured up an honorable man and dozed as fire consumed the engine on the wing just outside? Had it been obvious to everyone but me? Was I asleep? Had I slept?

What will it do to my children when they learn that their father just went and married another woman, and had more kids? That he just found a new city and a new family and that he’s…setting up franchises?

Our fathers are models for God. And if their father bailed, what does that tell them about God?

They will undoubtedly learn, as I have learned, that being good and kind and honest and decent doesn’t guarantee that someone won’t come along and firebomb your house. From the intentional to the indiscriminate, whether they deserve it or don’t deserve it. It’s just one of those unfair things about life we all learn to begrudgingly swallow down.

The slow, agonizing burn of betrayal and abandonment will hurt more than you’ve ever been burned. It will shake you from your warm bed with breathtaking callousness and insist upon your attention like nothing else can. Pain this intense cannot be reasoned with. It feels as though it will never relent. The love and the rage co-mingle to form a searing burn in the shape of a kiss…and it will leave a damned impressive scar. It can’t be sufficiently numbed by any known substance or treatment, nor should it be. Because whether it feels like it or not, this is the greatest moment of your life, and you shouldn’t be off somewhere missing it.

WAKE UP. On a long enough timeline, the survival rate for everyone drops to zero. It’s time to find that thing you know you’re meant to do or be, but may have run from, fearing it could not be done.

Fear? What’s fear after what’s been done to you? What’s fear’s grip look like now, compared against the merciless funeral pyre that someone made out of everything that you cared about?

Because only after disaster can we be resurrected.

The liberator who destroyed my property has realigned my paradigm of perception and is to be thanked. Not for the mayhem he brought into our lives in the ugliest and cruelest ways possible. No, not for that. Never for that.

For helping me see, finally, that he just loved himself more. He just loved himself more, my sweet children, and that’s all. It’s not a reflection on you. He did love you, but he was raised on television to believe one day that he’d be a millionaire, or a movie god, or a rock star. But he won’t. And as he slowly learned that fact, it made him very, very pissed off. And he ran away to go chase some elusive thing he’ll never be able to catch. Do you understand, my darlings? He’s been duped by the lies of this world. You were ENOUGH. I was ENOUGH. But he was blind and selfish and now he’s gone.

And if you ever were to ask him why he saw fit to do what he did, I doubt even he would understand the reason. I suppose, if he were being honest for a change, he might admit ‘I felt like destroying something beautiful.’ And that he most certainly did.

And thanks to him, I have honed my ability to let that which does not matter slide. The once mighty monoliths of doubt I’d constructed are now but toothpicks under my shoe. In the fearlessness with which I now approach most things, I find myself delightfully unrecognizable.

Turning me into a single-serving friend was, ironically, the only humane thing he did for me. I’ve learned to consciously stay in the right now. I find I give in to the moment that’s happening with wild abandon, because they deserve me to be here and only here. Not off somewhere emotionally, contemplating some dark and lonely future that my imagination has seen fit to saddle me with.

So I don’t look past today. Because they come first. They will always come first. Everything else can…slide.

It’s only after we’ve lost everything that we’re free to do anything.

Had I been sleeping? Had I slept? Yes. But I’m awake now.

And I know who I am, and what I’m here to do. I’m a thought-merchant on a mission. I’m a wordsmith wielding the truth. I’m a poet in a pragmatist’s body…and I finally know these things to be true down to my very bones.

I no longer care what the obstacles are, because the day that my nice neat little flaming sh** went flying into the stratosphere, it began a painful and productive journey towards embracing that which matters, and rejecting that which does not. No one is coming to help me. Yes, it’s all on me. Yes, I’m all alone. But…there’s a certain beauty in that.

Because I know something now that I didn’t know before the fire: I can take a punch, and I can get back up again.

The only way anyone can learn this is by getting good and bloodied. And after all, how much can you really know about yourself if you’ve never been in a fight?

There is exquisite satisfaction in knowing that one day I will cease to care if he exists. Today is not that day. But when it happens, it will unfurl with such subtlety that it may be imperceptible to others. It’s called a “changeover”. The movie goes on and nobody in the audience has any idea. When it happens, I won’t care what he thinks. He can have a front row seat to my triumphant rise from the ashes for all I care. My indifference will be Jack’s smirking revenge.

And so in the knowledge that my wedding ring may lie at the bottom of Lake Erie, or on top of Mt. Kilimanjaro, or may have become enjoined with some cans of creamed corn orbiting the 32nd moon of Jupiter, I feel at peace.

This has been an homage to all things Fight Club. My original writing combines with text from Chuck Palahniuk’s novel ‘Fight Club’ and Jim Uhls’ resulting screenplay (italicized in blue).

Author credit could not be more highly esteemed!